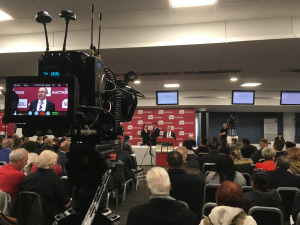 There was enthusiastic bidding in a packed auction room at Pride Park Stadium as more than £5 million was raised by SDL Auctions Graham Penny in front of the Homes Under the Hammer BBC TV cameras.

The most successful auctioneer in the East Midlands* saw proceedings get off to a lively start with an end-terraced house just a stone’s throw from the auction room selling for £83,500 from a **guide price of £45,000+. 28 Rugby Street, Wilmorton, which needs upgrading, has three bedrooms, a driveway and detached garage.

Several other lots stood out for their popularity with bidders, including 15 The Green, North Wingfield, a corner bungalow damaged by fire last autumn. Despite not being considered safe enough for viewings due to severe damage, it sold for £74,500 from a guide price of £35,000+.

The auctions team were expecting 107 Grasmere Crescent, Sinfin, to be popular as it received around 100 viewings – more than any other lot – and it didn’t disappoint, selling for £124,000 from a *guide price of £45,000+. One of the attractions of the traditional three bedroomed semi-detached house, which requires refurbishment, is its large garden which provides potential to extend, subject to planning permission.

One of the larger properties to go under the hammer was Hillcrest Home for Older People, Kenilworth Drive, Kirk Hallam. The former care home, which was being sold by Derbyshire County Council, closed in 2016 and provides a huge amount of potential for development, subject to planning permission.

After a tense bout of bidding, the property was purchased for £366,000 from a guide price of £265,000+ by Claire Farrington, of the Farrington Properties Group. The family-run business plans to turn the building into a large House in Multiple Occupation with 40+ units.

Claire said: “It’s always exciting to be the winning bidder at auction and to add another HMO to our portfolio. I was particularly keen on this property because we have already converted a care home into an HMO in south Derbyshire, so we will be replicating what we’ve done there.”

The plan is to create a series of “cluster flats”, each housing 8-10 people sharing a kitchen diner.

“This means we can put like-minded people together in smaller groups, so they are more likely to get on well with each other,” explained Claire. “The flats will be quite luxurious because that’s our style. It’s what people expect these days and it makes them want to stay longer.”

A new lease of life awaits the Former Baptist Church, Market Street, Clay Cross after it was sold for £107,000 from a guide price of £55,000+. The two-storey Victorian property is suitable for conversion to commercial or residential use, subject to planning permission.

The former farmhouse, 8 Main Street, Breedon on the Hill, was formerly a caravan parts and repair business which closed due to retirement. It sits on a large plot, with space for development, subject to planning permission.

It was purchased by Prime UK Property Ltd and director Elena Cherenkova says the company plans to redevelop it. She said: “We want to build new homes on the site, but we will keep the main farmhouse as it is a beautiful old property and it would be a shame to demolish it. It will be a small development of family homes, which are similar to those in the surrounding area so that the development is in keeping with the character of the village.”

Andrew Parker, auctioneer and managing director of SDL Auctions Graham Penny, said: “It was another great day in the auction room with some spirited bidding and some very happy buyers and sellers. The sheer variety of the lots on offer – from small parcels of land to larger properties suitable for conversion to apartment blocks – shows there is no ‘typical’ auction property… and a look around the room showed that there is no typical auction buyer.

“The transparency and speed of auction make it a great way to buy and sell property, with none of the hassles that can be experienced when selling by private treaty. There’s no gazumping and no lengthy property chains to slow down proceedings.”

Entries are now being invited for SDL Auctions Graham Penny’s next auction, to be held at Pride Park Stadium on Friday 24 May. Lots will feature in a bumper three-auction catalogue, covering room auctions in Derby, Leicester and Nottingham, as well as those being sold via online auction. To find out more about selling at auction, or to book a free auction appraisal of your property, please contact the team on 01332 242 880 or click here.