You are here: Home Latest News Rare opportunity to live in a prestigious apartment in a Victorian manor house 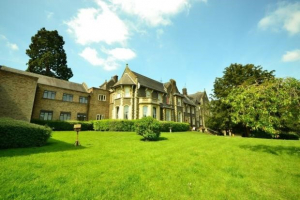 Auction is a great place to find an unusual property and SDL Auctions Graham Penny’s next auction in Leicester is no exception, with a distinguished apartment among those going under the hammer at the King Power Stadium on Tuesday 23 July.

Originally built as a home for coal and lime merchant Joseph Henry Ellis, in the 1920s it housed a school for deaf children and has more recently been converted into prestigious apartments.

And the sale of Flat 9, which has a *guide price of £75,000+, is a great opportunity for investors and private buyers, according to senior valuer Carl Finch.

He said: “It’s not often you find an apartment in such a splendid situation as this, with beautiful landscaped communal gardens. This would be the perfect property for professionals, downsizers or as a prestigious addition to a property portfolio.”

Entered via a secure intercom entry system, the ground floor apartment has a living room, modern fitted kitchen, two bedrooms with fitted wardrobes, a bathroom and rear lobby leading out into the gardens. A private patio area is accessed from the lounge and overlooks the landscaped grounds, and there is one allocated parking space plus further visitors’ parking.

It is well placed for shopping on Queens Road and Allendale Road, and convenient for the University of Leicester, hospitals, Victoria Park and the Leicestershire Golf Club. There are buses every 10 minutes into Leicester city centre, with its railway station, high street shops, theatres, cinemas and more.

Carl Finch added: “The location of Stoneleigh Manor really couldn’t be better; you have a quiet oasis of calm which is just a few minutes from the city centre. It really is in a lovely spot.”

The Stoneleigh Manor apartment is one of 23 lots – houses, apartments, commercial properties and land – due to go under the hammer at the King Power Stadium, Leicester, on Tuesday 23 July. They feature alongside 16 further properties being sold by online auction in the latest catalogue to be published SDL Auctions Graham Penny, the largest and most successful auctioneer in the East Midlands.

To see the full range of properties which are available, or to find out more about bidding online, by proxy or by telephone, please click here or call the team on 0116 254 9654.