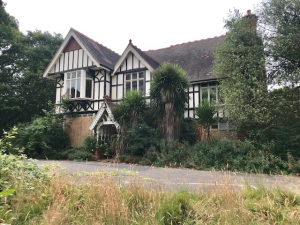 An imposing Victorian former old people’s home in Long Eaton is due to be sold at auction, providing a developer with the opportunity to turn it into new housing.

The former Southlands Home for Older People, 21 Main Street, will be going under the hammer at SDL Auction Graham Penny’s next auction at Pride Park Stadium, Derby, on Thursday 5 September, with a *guide price of £295,000+.

Head of auctions East Midlands Robert Stone is excited about the property’s potential.

He said: “With a spectacular Victorian building at its heart, this is an extensive site which opens up numerous possibilities for redevelopment. Its size and location make it suitable for a variety of uses, including residential, with the necessary planning permission.”

The focal point of the 1.28-acre plot is a large Victorian property which was built in the mid-19th century by Samuel Claye, a coal and coke merchant, and originally called Belfield. It retains many attractive architectural features, including ornate staircases, cornicing and stained glass windows. Substantial later additions have been made to the side and rear of the property to meet the needs of the care home, which eventually closed in 2015. The property has been vacant ever since.

Southlands sits in an established residential area close to Long Eaton’s Conservation Area and within a five-minute walk of the town centre, which has a mix of high street shops and independent businesses, as well as a theatre. Nearby is the popular West Park which has facilities for various sports and is home to the leisure centre, which has a gym and swimming pools. The property is also close to local schools, including the well-regarded The Long Eaton School and the independent Trent College Public School, both for pupils aged 11-18.

Transport links are good, too, with the A52 providing swift access to Derby, Nottingham and the M1 motorway, and East Midlands Airport less than a 20-minute drive away.

Robert added: “This really is a gem of a site, tucked away in a leafy part of Long Eaton but close to all the amenities you could need. It would make a wonderful location for an exclusive development of new homes, although we recommend any interested parties seek advice from the Planning Department at Erewash Borough Council before bidding.”

The former Southlands Home for Older People will be sold at Pride Park Stadium, Derby, on Thursday 5 September by SDL Auction Graham Penny, the largest and most successful auctioneer in the East Midlands.

There is still time to enter your own property into the auction. For more information, or to request a free, no-obligation auction appraisal, please click here or call the team on 01332 242 880.