You are here: Home Latest News Former Doveridge home of distinguished Cavendish family to go under the hammer 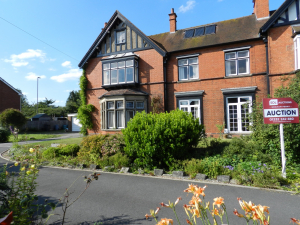 A four bedroomed home once occupied by the distinguished Cavendish family is to be sold at SDL Auctions Graham Penny’s Derby auction next month.

One of the most impressive homes in the village, 2 East Lodge, Cavendish Close, Doveridge, Derbyshire, has a *guide price of £350,000+ and is due to go under the hammer at Pride Park Stadium, Derby, on Thursday 5 September.

Once part of the Doveridge Hall estate, the property, which requires improvement and upgrading, became home to members of the Cavendish Family in 1863. Due to financial difficulties, the family of Sir Henry Manners Cavendish, 3rd Lord Waterpark and a direct descendant of Bess of Hardwick, moved there in order to let out the main Doveridge Hall, which was eventually demolished in 1938.

Much later in the property’s history, in the 1970s East Lodge was split into two large houses, with number 2 being purchased as a family home and remaining in the same family until earlier this year.

It is now set to be one of the star lots at SDL Auctions Graham Penny’s next Derby auction, according to Robert Stone, head of auctions East Midlands.

He said: “This is an absolutely stunning property with a fascinating history. Apart from the house itself, which is extremely appealing and has some fabulous architectural features, you will be walking in the footsteps of Bess of Hardwick’s direct descendants.”

The brick-built property has mock Tudor style wood panelling, with dressed stone and period style windows and stands imposingly at the head of Cavendish Close, an attractive cul-de-sac.

Inside there is spacious accommodation which begins with an impressive reception hallway/dining room with original staircase, beamed ceiling and panelling. The stand-out rooms on the ground floor are the two front reception rooms, a sitting room and a drawing room, both with feature open fireplaces and decorating ceiling coving. An inner hallway with a disabled lift leads through to the breakfast kitchen, which has fitted units and built-in appliances, and there is a timber-framed orangery on the side of the property with an internal door leading through to a boiler room.

On the first-floor split-level landing, there is a small cloakroom with WC, while the main landing leads to three double bedrooms at the front of the property, the master having an en suite shower room, and a bathroom with separate WC.

A ladder leads to the attic rooms, which have the potential to be converted into a number of bedrooms and bathrooms, subject to planning permission and building regulations.

Outside there is a double brick-built attached garage, plenty of car standing, a neat front garden, lawned area at the side and walled yard at the rear. Access is currently via a shared driveway, although there is potential to alter this, subject to planning permission.

The property is not far from the centre of Doveridge village, which as a good range of amenities including local shops, a primary school, recreational facilities and a pub, The Cavendish Arms. A wider range of facilities, including supermarkets, can be found in nearby Uttoxeter.

Transport links are excellent, with the A50 trunk road providing easy access to Uttoxeter, Derby and Stoke-on-Trent.

2 East Lodge, Cavendish Close, Doveridge is due to be sold by SDL Auction Graham Penny at Pride Park Stadium, Derby, on Thursday 5 September with a guide price of *guide price of £350,000+.

For more information, or to request a free, no-obligation auction appraisal of your own property, please click here or call the auctions team on 01332 242 880.