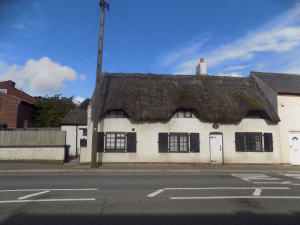 Hot on the heels of a successful 2019 – which saw SDL Auctions Graham Penny retain its position as the top auctioneer in the Midlands – the new auction season kicks off with a 40-page catalogue featuring 26 residential and commercial lots.

One of the most eye-catching lots going under the hammer at the King Power Stadium on Tuesday 11 February is a pretty 17th-century thatched cottage near Lutterworth.

Hunters Cottage, 13 High Street in Husbands Bosworth, which has a *guide price of £140,000+, is Grade II Listed and packed with character features such as latched doors, an inglenook fireplace, polished floorboards, beamed ceilings and exposed timbers.

Senior valuer Carl Finch said: “This is a fantastic character property which is in general good order but requires repairs or replacement of the thatched roof. Once that is completed, the new owner will have a dream chocolate box cottage with bags of kerb appeal. It would make an excellent investment.”

Another stand-out property is 14 Hallam Crescent East in Braunstone, which sits in a tree-lined street close to shops, amenities and the popular Braunstone Park.

The three bedroomed semi-detached house, which has a guide price of £130,000+, has gas central heating and UPVC double glazing but requires some cosmetic modernisation. When this is completed, auctioneers estimate that it could be let at £800 per calendar month.

There are traditional terraced properties going under the hammer, too, including the first lot of the day, 14 Henton Road in Leicester, which has a guide price of £100,000+.

Carl said: “This would make an ideal property for an investor to add to their buy-to-let portfolio as it is well placed the Royal Infirmary Hospital and De Montfort University. We estimate the rental income to be £650 per calendar month.”

The house originally had just two bedrooms but has been altered to provide three smaller bedrooms, a bathroom and a further cloakroom on the first floor. The ground floor has an entrance lobby, kitchen and open-plan lounge/dining room.

If it’s an exclusive development opportunity you’re looking for, then a plot of land to the rear of 43 Lutterworth Road in Aylestone could be the lot for you.

The half-acre plot is in a private location off The Banks and had planning permission for four detached houses, but auctioneers say this could be regained easily.

The plans involved the demolition of a garage to create access to the site and the construction of one five bedroomed house and three with four bedrooms, along with a new single-storey detached garage for the existing property.

Carl said: “This is a superb opportunity to purchase a valuable parcel of land in a highly desirable location. There should be no problems reinstating the planning permission so this would make an excellent investment for a small developer.”

These are just a sample of the residential and commercial properties going under the hammer at the King Power Stadium in Leicester, on Tuesday 11 February.

To see the full catalogue click here and to find information about bidding online, by telephone or by proxy click here.