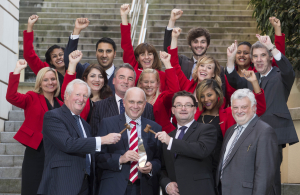 A leading Birmingham business has been banging the gong for the city in London.

Following gold in The Negotiator Awards it has taken silver in the Best Auction Agency category of the prestigious Estate Agency of the Year Awards held at the Lancaster London Hotel.

“It is another proud result for us,” said senior partner Rory Daly. “We are absolutely thrilled.

“Year on year we attempt to improve as a business and I am just so happy for the staff whose efforts are truly outstanding.”

In association with The Sunday Times & The Times, and sponsored by Zoopla, The Estate Agency of the Year Awards are billed as the industry’s Oscars – the longest running and most highly regarded awards event in the sector.

The citation stated: “This company prides itself on giving professional, honest advice and manages to stay impartial when recommending the best method of disposal for a property, even if that recommendation leads to the vendor selling elsewhere.

“The team provides as much exposure to the property as possible, and have spent time introducing new platforms to do this; there is a new website which has been redesigned to be much more user friendly as well as digital catalogues and downloadable documents. They have also implemented a new bespoke auction package.

“Growth is improving year on year and can be directly attributed to the focused marketing activities and innovative service.

”SDL Bigwood values corporate social responsibility highly and its auctioneers personally conduct auctions for charities, raising over £1.5 million. The majority of the auction team have been with SDL Bigwood for between 10 and 25 years, and have over 275 years’ experience between them, so clients are in expert hands.”

In The Negotiator Awards the firm won the top accolade, being named Residential Auction House of The Year.

SDL Bigwood are one of the largest property auction houses outside London and are firmly established in the top ten national auction houses in the UK.

The firm has been expanding fast and now has offices in Birmingham, Stratford-upon-Avon, Henley-in-Arden, Loughborough, Southampton and London.