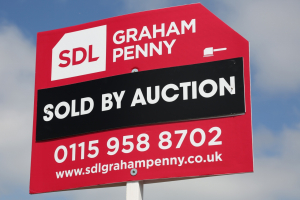 21st December 2016 – SDL Graham Penny, the new name for the most successful auctioneer in the East Midlands, has this week held its last Nottingham auction of the year and raised an impressive £2m.

To view the results for the Nottingham December auction click here

The auction, on Wednesday 14th December at Nottingham Racecourse, saw 29 varied residential investment houses, development land, mixed use properties and commercial premises from across Nottinghamshire and beyond go under the hammer.

Andrew Parker, auctioneer and managing director, commented: “We had a very busy auction room at Nottingham Racecourse this week with several buyers tirelessly bidding to get their hands on their next purchase. Plus we had multiple remote bids via telephone, internet and by proxy and we’ve also sold several lots after the auction.

“Throughout this year we have raised over £16m in our Nottingham auctions and sold more than 180 lots. Next year we have seven more auctions in Nottingham and with our first on Thursday 2nd February we are inviting anyone looking to sell in the New Year to get in touch now to arrange a free property appraisal.”

Amongst the lots selling particularly well on the auction day were:

Since inception in 2006, SDL Graham Penny has sold more than 5,000 lots across the East Midlands and raised over £500m for clients. Formerly Graham Penny Auctions, it joined the SDL Group in early 2016, making the SDL Auctions network the fourth largest in the UK and the biggest outside of London.