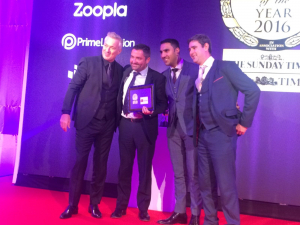 SDL Bigwood, part of the fourth largest auction house in the UK, which holds regular auctions in Birmingham and Coventry took home a second silver award of the year in The Sunday Times Estate Agency of the Year Awards.

Auctions partner Gurpreet Bassi and senior valuer Robert Stone were presented with the silver award in the Best Auction Agency category, by 80s pop legend Martin Kemp and TV presenter Penny Smith. The trophy will now line up alongside a silver award presented to the team at last month’s Negotiator Awards.

Rory Daly, chief operating officer and auctioneer, commented: “This is an excellent way to round off a great 2016. To have been recognised by our industries peers once is amazing, but to receive two awards is fantastic. Thank you to all our clients and partners for their continued support.”

The Estate Agency of the Year Awards is held in association with The Sunday Times and The Times and sponsored by Zoopla. Held on Friday 2nd December at the London Hilton Metropole, the awards are the longest running and most highly regarded in the estate agency industry.

The judges said: “SDL Auctions sells across the entire spectrum; they have a high success rate and are experienced in selling a variety of property types. Business has increased significantly over the past 12 months due to the excellent reputation they’ve built – the number of lots has grown by over one third.”

Comprising SDL Graham Penny in the East Midlands, SDL Bigwood in the West Midlands and the recent addition of a new auction centre covering Cheshire and North Wales, headed up by well-known auctioneer Edward Feather, SDL Auctions is the fourth largest auction network in the UK and the biggest outside of London.

Rory added: “Our team works incredibly hard all year round to provide an excellent service to our customers and while the end of the year is edging closer, we are already looking ahead to 30+ auctions in 2017.”