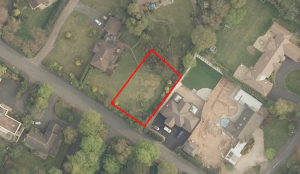 A very rare and much prized site in the affluent village of Barnt Green which already has planning permission for a substantial six bedroomed house will undoubtedly be one of the most sought-after lots in SDL Auctions Bigwood’s December auction at Villa Park on Wednesday 12 December.

Jason Lee, head of auction at SDL Auctions Bigwood, said: “It is rare that land in such a prominent position becomes available in Barnt Green and to have planning permission already in place is an early Christmas present for the winning bidder.”

The 0.2 acre site at Plymouth Road sits to the rear of 2 Berry Drive and is roughly rectangular in shape. It is close to the Lickey Hills and in one of the most popular commuter villages in the region for business people and professionals working in Birmingham.

It is close to the exclusive Blackwell Golf Club, where membership is by invitation only.

It is also handily located for Barnt Green railway station, approximately a mile away, and Junction 4 of the M5 two miles away, providing access to the M42, M40 and M6 in minutes.

Bromsgrove District Council is the relevant planning authority and the site has a *guide price of £425,000.

Jason added: “Six bedroomed properties don’t often come on the market in such a sought-after location as Barnt Green, so we are anticipating strong bidding for such a great lot.”

SDL Auctions Bigwood is the biggest and most successful property auctioneer in the West Midlands and was recently named Company of the Year in the Birmingham Post Business Awards.

To view the full catalogue for the Wednesday 12 December auction at Villa Park click here.