You are here: Home Latest News Ownership of this beamed character cottage just a few clicks away

Ownership of this beamed character cottage just a few clicks away 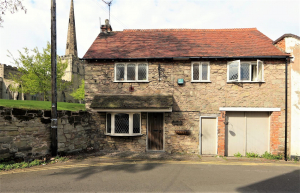 Packed with character and potential, a beautiful beamed cottage in Castle Donington could be yours with just a few clicks of the mouse.

The extended four bedroomed semi-detached home, 2 Church Lane, Castle Donington is offered for sale via conditional online auction by SDL Auctions in partnership with Newton Fallowell. The guide price is £169,000 and the auction ends at noon on Tuesday 3 September.

It’s an exciting find, according to Jason Lee, national sales director at SDL Auctions, who said: “It’s rare to come across such a beautiful character property with so much potential to extend but this is one such find. It has no less than five outbuildings, providing the opportunity to transform them into additional living space, subject to planning permission, of course.”

The 17th-century house has already been extended twice; once in the Victorian era and again in 2009. The most recent work resulted in the superb 19ft vaulted living kitchen with Esse range cooker, Belfast sink, oak-fronted units and quarry tiled floor.

As well as the stunning kitchen, the ground floor has a spacious beamed sitting room with a reclaimed brick fireplace as its focal point, housing a cast iron Hunter Herald multi-fuel stove. There is understairs storage and folding doors open into a study area with a pine desk unit.

The split-level landing leads to the four bedrooms, two of which have built-in cupboards, and a stylish family bathroom which was installed in 2008. This has a roll-edged panelled bath and separate corner shower cubicle.

Outside there is a low-maintenance walled rear garden, with covered parking and five good-sized brick outbuildings which were formerly used as butcher’s premises and include one two-storey building and a walk-in chiller.

The property is next to St Edward’s parish church in the popular market town of Castle Donington, which has a good selection of shops, restaurants and amenities.

Jason added: “Castle Donington is extremely popular, particularly with commuters as it has such good transport links, with the M1 motorway and the A50 within easy access and, of course, East Midlands Airport close by. Getting around from Castle Donington couldn’t be easier.”

2 Church Lane, Castle Donington has a guide price of £169,000 and is open to bidding until the conditional online auction ends at noon on Tuesday 3 September. To find out more about the property, please call Newton Fallowell on 01332 865696.