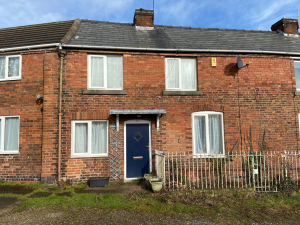 Properties can be like buses… you wait years for the right one and then two turn up at once.

This could certainly be said about 55 Church Road in Quarndon, the second cottage in this exclusive village to be sold by SDL Auctions Graham Penny this year.

The double-fronted property has a *guide price of £135,000+ and will be sold at Pride Park Stadium in Derby, on Thursday 26 March.

Known for its luxury properties, Quarndon’s average house price is £653,719, according to property portal Zoopla. And auctioneers are expecting the cottage to be snapped up as quickly as its neighbour, 53 Church Road, which was sold by SDL Auctions Graham Penny last month for £162,000. Before that, Rightmove reports that the last property in the village to be sold for less than £200k was in 2015.

Robert Stone, head of auctions East Midlands at SDL Auctions Graham Penny, said: “Don’t be misled by the fact that we’ve had two Quarndon properties in this price bracket in consecutive months as this is extremely unusual. Cottages under £200k simply don’t crop up every day in this exclusive village so if you missed out on the first cottage at last month’s auction, here’s a rare second chance.”

Situated in a small row of cottages surrounded by fields, the freehold cottage is in good condition and has gas central heating and uPVC double glazing. On the ground floor, it features an entrance lobby, two reception rooms and a kitchen, with two bedrooms and a bathroom upstairs. Outside it has a small garden and parking at the front, plus a rear garden.

Quarndon’s pretty village centre, rural nature, proximity to Derby and the fact that it is in The Ecclesbourne School catchment area have made it one of the most desirable addresses in Derbyshire.

It has a church, cricket club and primary school and both the village tea rooms – run by Rebecca Barker, wife of former Derby County captain Shaun Barker – and The Joiner’s Arms, which serves food and craft beers, are well regarded by locals and visitors.

Nearby are Allestree Park and golf course and the National Trust-owned Kedleston Hall and grounds and there are plenty of countryside walks from the doorstep. A wider range of shops and amenities can be found in neighbouring Allestree and it’s just a short commute into Derby city centre.

Robert added: “This is a real gem of a property which is expected to attract a great deal of interest. The price bracket means it’s the ideal opportunity for a young couple or family to make a home here or for an investor to add to their rental portfolio with a charming cottage which is sure to be much in demand.”

55 Church Road in Quarndon will be sold at SDL Auctions Graham Penny’s March auction at Pride Park Stadium in Derby on Thursday 26 March.

Entries are still being processed for the auction so, if you would like a fast, transparent and hassle-free sale of your property, you can request a free, no obligation auction valuation by calling 01332 242 880 or clicking here.