You are here: Home Latest News Music studios expected to strike a chord with property investors

Music studios expected to strike a chord with property investors 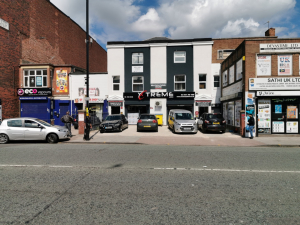 A cultural hub of music studios could prove to be a sound addition to a commercial property portfolio for investors in Birmingham.

SDL Auctions Bigwood is confident of drumming up plenty of interest in Multicultural House, 55 Great Hampton Street, Birmingham, when it is sold at Villa Park, Birmingham, on Thursday 18 July with a *guide price of £595,000+.

The three-storey mid-terraced property is split into 30 studio units for music artists, tattoo artists and similar businesses, accessed via several communal entrances. In addition, there are two larger commercial units on the ground floor – used as a single vape shop – and a further studio within the cellar.

The property’s potential struck a chord with valuer Jim Demitriou, who said: “With 28 of the 32 units already let, this property would make an excellent investment for a commercial landlord who wants to hit the ground running.”

Commercial valuer Chris Theocharides added: “There is further potential to increase the annual income by letting the remaining units and there is always the possibility of a change of use in the future, subject to the necessary consents, of course. With the relevant permissions in place, I could see this property being successfully converted into apartments or perhaps a House in Multiple Occupation.”

The freehold property, which has parking at the front, occupies a prominent position close to Birmingham’s trendy Jewellery Quarter, which is known for its heritage and culture. Great Hampton Street is close to several music studios, gig venues and theatres, giving the area a vibrant and creative atmosphere.

It is within walking distance of Birmingham city centre, with excellent road links to the motorway network via the Aston expressway and less than half an hour’s drive to Birmingham International Airport.

Multicultural House is among 83 properties to feature in the latest auction catalogue from SDL Auctions Bigwood, the biggest and most successful auctioneer in the West Midlands. Commercial properties, homes and land will be going under the hammer at the company’s fourth Birmingham auction of the year at Villa Park on Thursday 18 July.