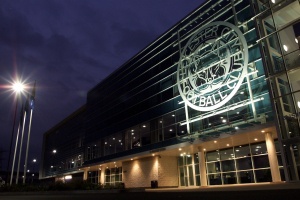 Houses and flats of all shapes and sizes went under the hammer SDL Auctions Graham Penny’s Leicester auction this week, raising a total of £2.8 million.

Among the lots sold at the King Power Stadium was a pretty cottage in Nanpantan, an impressive detached house in Leicester and a block of apartments, also in the city.

Andrew Parker, managing director and auctioneer at SDL Auctions Graham Penny, said: “From a one bedroomed city centre garden apartment to rural family homes on large plots, we had all kinds of property at our second Leicester auction of the year.”

The lots were featured in a three-auction catalogue from SDL Auctions Graham Penny, the most successful property auctioneer in the East Midlands. The catalogue is a must-read for investors, as it covers room auctions in Leicester, Derby and Nottingham, as well as those being sold via online auction.

The Nanpantan cottage – which comes with woodland, gardens and a paddock – was one of the more remote properties to be sold at the auction, being half a mile from its nearest neighbours in the heart of the Leicestershire countryside. Rose Cottage, Nanpantan Road has three bedrooms and sits on a one-acre plot, providing scope to extend subject to planning permission. Despite requiring modernisation, the three-bedroomed cottage sold for £351,000 from a *guide price of £350,000+.

Another family home with potential was 59 Oakland Avenue, Leicester, which sits on an extensive plot with the potential to build in the garden subject to planning permission. The double-fronted three bedroomed detached house in a desirable part of Leicester near to Watermead Country Park had a guide price of £275,000+ and sold under the hammer for £321,500.

Terraced properties are much in demand, both by landlord investors and tenants, and several of these were sold under the hammer, including 51 Midland Road, Ellistown, a three bedroomed house close to Bardon 22 Business Park, which sold for £95,500 from a guide price of £85,000+.

One of the larger terraces, 159 Duncan Road, Leicester, has four bedrooms and is well placed for the Leicester Royal Infirmary Hospital and Leicester University, both good potential sources of tenants. The property, which requires modernisation, had a guide price of £135,000+ and sold for £146,000.

With the potential to be converted to a six bedroomed House in Multiple Occupation, subject to planning permission and any necessary licensing, and ideally placed for this, being close to the university and hospital, 56 Fosse Road South, Leicester attracted enthusiastic bidding, selling for £199,500 from a guide price of £169,000+.

24 & 24a Oban Street, Leicester, meanwhile, is an end-terraced property comprising two self-contained one bedroomed flats, both currently let to tenants. It sold for £160,500 from a guide price of £135,000+.

1a & 1b Evington Parks Road, Evington, Leicester, also comprises two self-contained one bedroomed flats but has the potential to convert to a four bedroomed HMO which would not require a licence and could earn around £20,000 per year. It sold for £220,000 from a guide price of £165,000+.

Andrew added: “There was a great atmosphere in the auction room and we were delighted to get some excellent prices for our sellers. It is always satisfying seeing a wide variety of properties sell under the hammer as we know the path to completion will be hassle-free and quick, which is good news for both buyers and sellers.”

As the most successful property auctioneer in the East Midlands, SDL Auctions Graham Penny raised £8.3 million under the hammer for sellers in February alone. In 2018, SDL Auctions sold 2,135 lots, raising £215m, representing an increase of 25% on the previous year.

Auctions will continue to be held around the country during April, and entries are also being invited for the next auctions, to be held in May. To find out more about buying or selling at auction, or for a free auction appraisal of your property, click here or call 0116 254 9654 to speak to the auctions team.