You are here: Home Latest News Last chance of the year to buy a commercial property at Derby auction 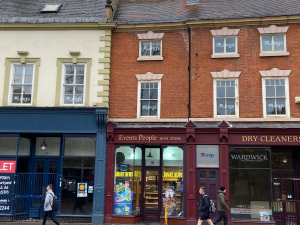 Developers and investors have one more chance this year to boost their commercial portfolios by buying a property at auction in Derby.

SDL Auctions Graham Penny will be selling commercial opportunities including shops, offices and mixed-use properties at its final Derby auction of the year at Pride Park Stadium in Derby, on Friday 13 December.

They all feature in the auctioneer’s latest catalogue, which includes 42 residential and commercial lots. Among them is a retail unit in a prime location in Derby’s trendy Cathedral Quarter.

12 Sadler Gate in Derby, which has a *guide price of £135,000+, is a well presented retail outlet currently housing the Padley Centre charity shop.

The property, which falls within the Derby city centre conservation area but is not listed, comprises a 360 sq ft sales area with changing room, plus stairs to the first floor, which has a kitchen, WC and two rooms suitable for additional retail space for offices. There are two further rooms suitable for offices or storage on the second floor.

Nick Trow, commercial auction valuer at SDL Auctions Graham Penny, said: “This is a spacious property in a prime retail location in one of the most sought-after streets in Derby. Sadler Gate is already home to retailers such as White Stuff, Joules, Brigdens and Dr Martens, so we’re expecting a lot of interest in this property.”

Nearby in Derby’s Wardwick, there are two commercial properties going under the hammer; a ground-floor shop and a former office suite.

The shop, at 49 Wardwick in Derby, is a freehold ground-floor Grade II listed commercial property currently let to a newsagent’s business on a new five-year lease at £8,000 per year. It forms part of an attractive row of listed buildings close to the former Debenhams regeneration site. The guide price is £55,000+.

A few doors away in the same parade of Grade II listed buildings is 43 Wardwick in Derby, a spacious former office suite arranged over three floors with a guide price of £75,000+.

The freehold property offers around 2,500 square feet of accommodation and comprises 13 separate rooms, making it ideal for conversion to residential/student accommodation, subject to planning permission.

On the ground floor is a private entrance door, passaged hallway, fire escape access to the rear, two rooms and a staircase to the first floor. The first floor has nine rooms, a kitchen and WCs, while the second floor has two very large rooms.

Another excellent commercial investment can be found in Alvaston, where Unit 6, Gillamoor Court, Keldholme Lane, is a tenanted two-storey semi-detached retail premises with three bedroomed accommodation above.

The leasehold property, which has a guide price of £115,000+, is currently a successfully run Chinese Takeaway, sublet for a term of 18 years from April 2013 producing a rental income of £11,960 per year.

Back in the city centre, 1 Sacheveral Street, off Back Sitwell Street, is a freehold café close to the Intu shopping centre and The Spot. The single-storey property, which has a guide price of £65,000+, has operated as a café for well over 20 years, with a takeaway service and seating for 18 diners.

It is fully equipped, with the kitchen including a microwave, fridges, two griddles, two fryers, extractor hood, six-ring hob with oven below, Francino coffee maker, till and glass-fronted food display chiller.

Nick said: “This property has already proved its worth, having been run as a successful café business for over 20 years. It would be a great investment as it could be let at £700 per calendar month and we understand there is no VAT payable on the rent.”

For information about any of the other properties, or to see the full range of lots going under the hammer at Pride Park Stadium on Friday 13 December, you can view the full auction catalogue here.