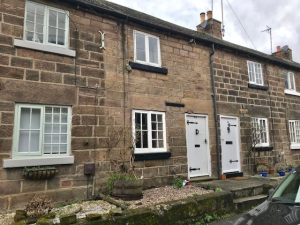 The enduring appeal of a traditional stone cottage will be drawing bidders to SDL Auctions Graham Penny’s 100th Derby auction this month, when they can choose from properties in Duffield and Belper.

The cottages, in two of Derbyshire’s most desirable locations within the Derwent Valley Mills World Heritage Site, will be among a wide variety of lots sold on Thursday 26th March.

Due to government-advised limits on social contact, the auction will not take place at Pride Park Stadium as usual, but will be held via video link with buyers having the choice of several remote bidding options.

Requiring a scheme of improvement and upgrading, the cottage features a front sitting room with cast iron log burner, a fitted kitchen and bathroom on the ground floor. Upstairs are two bedrooms, while outside is a small forecourt, with a south westerly-facing rear yard and garden.

The cottage is in the heart of the village, which has an excellent range of amenities, shops and well-regarded schools, including the noted The Ecclesbourne School for secondary pupils. Recreational facilities include squash, tennis, cricket, football, rugby and golf.

Robert Stone, head of auctions East Midlands at SDL Auctions Graham Penny, said: “Duffield has always been one of the most sought-after villages in Derbyshire, due in part to its ‘best of both worlds’ location with the countryside on the doorstep yet within easy reach of Derby city centre. The other draw is, of course, the Ecclesbourne School, which is widely regarded as one of the best state schools in the county and has been rated Outstanding by Ofsted.”

The second stone cottage to be sold will be 20 Long Row in Belper, which also requires a comprehensive scheme of upgrading and improvement and has a guide price of £137,000+.

The ground floor accommodation comprises a lounge with enclosed staircase to the first floor, an open-plan dining room/kitchen, a rear hall and utility room with WC.

On the first floor there is a landing with a large built-in storage cupboard, a bedroom and a bathroom with bath and separate shower cubicle. Stairs lead to the second floor, which features a generously sized bedroom with a range of fitted wardrobes and has superb views of Belper’s East Mill.

Outside, there is an enclosed garden at the front, and a rear garden with a lawn, rockery, decked seating area, vegetable patch and storage shed.

Having just won the best High Street Award for England at the Great British High Street Awards, Belper is now at the top of many people’s lists of top locations. It has an excellent range of high street and independent shops and restaurants, plus easy access both to Derby city centre and the Peak District National Park.

Robert said: “Belper is becoming more desirable every day and this sale provides a genuine opportunity for a discerning purchaser to acquire a sensibly-priced cottage in a particularly sought-after part of the town.”

Both cottages are due to go under the hammer in SDL Auctions Graham Penny’s 100th Derby auction on Thursday 26th March. Viewings are taking place by appointment as normal and to register as a remote bidder, whether by phone, by proxy or online, you can complete the form here.