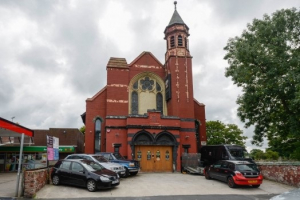 Investors are getting revved up for the sale of a former motorcycle spares shop in an old chapel in Southport which is due to go under the hammer in October.

Anyone looking for a character property with development potential will find their prayers have been answered when The Old Church, Cemetery Road, Southport is sold by SDL Auctions North West at the AJ Bell Stadium, Manchester, on Thursday 10 October.

In 2010 it was sympathetically refurbished at a cost of more than £350,000 into high-spec and flexible commercial premises with a separate two bedroomed apartment. Since then it has been occupied by a Harley Davidson parts and accessories business but is now being sold due to retirement.

Andy Thompson, head of auctions North West, said: “This is a beautiful and flexible old building which has been well maintained by the current owner. It offers a fantastic opportunity to investors, as it has amazing scope for a sensitive redevelopment, subject to planning permission.”

It has lapsed planning consent, dated July 2006, for three self-contained luxury apartments in the roof space, after the demolition of existing single-storey buildings at the rear of the property.

Andy added: “If the planning permission was granted again, apartments in the roof space would be simply stunning, with gothic arched windows are a particularly attractive feature, particularly the one at the front of the property, which would make a spectacular focal point. Luxury apartments in a building such as this are likely to be much in demand by both tenants and homebuyers.”

Outside there is parking at the front of the property and a large enclosed rear yard extending to approximately 500 sq ft.

Occupying a prominent position fronting Cemetery Road, the property is just a short distance from Southport town centre, which has a good selection of shops and amenities, and the renowned British Lawnmower Museum. Other tourist attractions include beaches, amusement parks, a model railway village and a pier.

The town has good transport links including a local bus network, Southport Railway Station and direct access to the A570 and A565.

The Old Church, a freehold property, is being sold with vacant possession at SDL Auctions North West’s fifth Manchester auction of the year, at the AJ Bell Stadium on Thursday 10 October.

It’s not too late to sell a property at the auction, as entries are still being accepted. To find out more about selling at auction, or to request a free auction appraisal, click here or call 0161 774 7333 to speak to the auctions team.