You are here: Home Latest News Homes for under £50,000 among properties sold at Birmingham auction

Homes for under £50,000 among properties sold at Birmingham auction 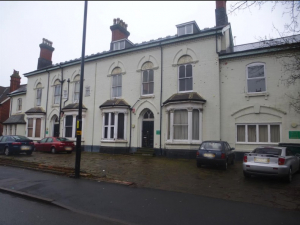 With lots selling from as little as £100 up to over £400,000, there was something to suit all budgets at the latest Birmingham auction held by SDL Auctions Bigwood.

In a room packed with enthusiastic bidders, the biggest auctioneer in the West Midlands held its third Birmingham auction of the year at Villa Park, raising over £6.3 million under the hammer.

The lowest-priced lots were for parcels of land but there were some homes for buyers with smaller budgets, too, including a house in Gainsborough which sold for £33,000 from a *guide price of £30,000+. 12 Waterworks Street is a traditional two bedroomed mid-terrace in need of modernisation; a property type which proves popular at auction with investors keen to add value.

Flats were also popular with buyers, with the first lot of the day getting the bidding off to a lively start. The one bedroomed ground-floor flat, 7 New Meeting Street, Oldbury, requires upgrading and sold for £50,000 from a guide price of £40,000+.

Several flats sold for less than £50,000, proving that budget buys are still an option in the West Midlands property market.

There was keen bidding for larger properties, too, with 82 Webb Lane, Hall Green, a detached house with three reception rooms and four bedrooms, selling for £320,000 from a guide price of £275,000+.

A three-bedroomed detached house in Dudley, 19 Redhall Road, represented an excellent buy-to-let opportunity as it currently realises a monthly rental income of £950. It sold for £160,000 from a guide price of £130,000+.

Further afield, Bonita, a beautiful period stone cottage in the hamlet of Williamscot, near Banbury in Oxfordshire, sold for its guide price of £225,000.

Some of the larger properties sold at the auction are suitable for conversion to Houses in Multiple Occupation (HMOs), with the potential to produce healthy yields, subject to planning permission and regulations.

Lead auctioneer Rory Daly was delighted the auction was such a success.

“It was another great day at the rostrum, with another packed room of enthusiastic bidders, as well as those bidding online and by telephone.

“As the largest and most successful auctioneer in the West Midlands for more than 10 years running, we draw interest from investors and private buyers from all over the country and it’s particularly satisfying to know that their transactions will be smooth and free of hassle and delays caused by lengthy chains. One of the great benefits of buying and selling at auction is that exchange of contracts takes place at the fall of the hammer and completion will usually take place within 28 days.”

The auctions team are now inviting entries for the next SDL Auctions Bigwood auction on Thursday 18 July. To find out more about selling at auction, or for a free auction appraisal of your property, call the team on 0121 233 5046 or click here.