You are here: Home Latest News High-yield investment opportunity could be just what the doctor ordered

High-yield investment opportunity could be just what the doctor ordered 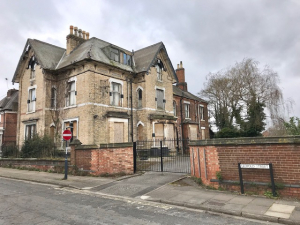 A grand old gentleman’s residence is among the Derby lots going under the hammer in SDL Auctions’ second national property auction this month.

After £7.7 million was raised in lockdown auctions in April, entries are now being taken for the second national property auction this month to be live-streamed over the internet.

Among them is 6 Leopold Street in Derby, which has a *guide price of £295,000+. Previously used as a doctors’ surgery, the property now has full planning permission for conversion to a House of Multiple Occupation with the potential to realise an annual rental income of £79,560.

Robert Stone, head of auctions East Midlands, said: “This is a truly superb character property with some beautiful architectural features which would make an excellent high-yield investment. It has been extended over the years to make it extremely large and ideal to become a fabulous HMO. It’s close to the Intu shopping centre, so residents would have all the amenities they need right on their doorstep.”

Planning permission was granted in November 2019 to convert the three-storey property into an 18 bedroom HMO. However its size and style mean the property also lends itself to other uses, according to Robert.

“Investors are sure to spot the versatility of this property. As it has already been a doctor’s surgery in the past, it would also lend itself to other business uses, subject to planning permission, potentially offering an even greater yield, making it suitable for various types of investor.”

Leopold Street is a relatively quiet location in the heart of Derby city centre. The property is surrounded by others of a similar style and has gated parking with space for several vehicles.

It is ideally placed for a great number of employment opportunities, including the Intu shopping centre and both London Road Community Hospital – which is just a 10-minute walk away – and the Derby Royal Hospital, which is easily reached within 15 minutes by bus or car.

6 Leopold Street will be sold by SDL Auctions in its second national property auction, which will be live-streamed over the internet on Thursday 28th May.

Managing director and auctioneer Andrew Parker will operate from the company’s auction studio at its head office, with his wife, Rachael, who is the regional property manager for the East Midlands, managing internet bidding. Telephone bids will be managed by a remote team, who will convey them to the auction studio via Microsoft Teams.

Robert added: “The model of operating behind closed doors, which we have adopted for the lockdown period, has already proved extremely successful. We made the decision to carry on running auctions in recognition of the fact that many people simply cannot afford to wait for the crisis to pass, which was borne out by the fact that 115 properties were listed in our April auction.”

In April, SDL Auctions not only raised £7.7 million for sellers but its auctions were watched online by 975 people and attracted more than 680 remote bids.

Robert said: “Auction is a lifeline for many sellers at the moment, and offers speed, transparency and certainty, with a fall-through rate of less than 2% – something that sellers on the open market can only dream of.”

SDL Auctions’ second national property auction takes place on Thursday 28th May. Properties can also be sold online at any time. To find out more about the best sale method for your property, click here or call the team on 01332 242 880.