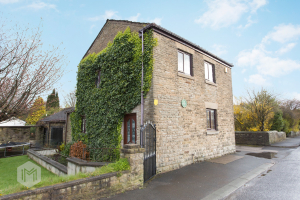 A beautiful 19th-century stone cottage with original features including beamed ceilings is expected to attract a lot of attention when it is sold by online auction.

Set within a conservation area, Bran Cottage 194 Ormskirk Road, Upholland, Wigan is believed to have been built in 1848 and was once a blacksmith’s workshop. It is to be sold by conditional online auction by SDL Auctions in partnership with Miller Metcalfe, with a starting price of £139,000, ending at noon on Tuesday 21 May.

He said: “It has all the period features which people desire in a country cottage, such as exposed stone walls, but is deceptively spacious and has all the modern conveniences required for a 21st-century lifestyle.”

The house has a good-sized entrance hallway, with exposed feature walls, leading to the spacious lounge, which has a Victorian-style feature fireplace, exposed brick wall and archway, wooden beams and feature glass panel. The hub of the home is the open plan kitchen dining area, with feature stone archway between the two areas.

Upstairs, the landing has a feature exposed brick wall and loft access. It leads to the three bedrooms, the master having fitted wardrobes, and the family bathroom which has a shower over the bath. Outside there is a paved courtyard at the rear and a gated side garden.

Jason added: “This is a property which is packed with character but is perfectly suited to family living. It has a ‘best of both worlds’ location, too – within walking distance of local amenities but just a stone’s throw from open countryside and the popular Beacon Country Park.”

The country park has more than 300 acres of rolling countryside with wildflower meadows woodland, picnic areas and children’s play area, as well as a golf club, café and public toilets.

Bran Cottage is on the edge of Upholland – also known as Up Holland – which was once home to Casualty actor Ian Bleasdale and Richard Ashcroft, lead singer of The Verve, and is well served with convenience stores, pubs, restaurants and a primary school, and the cottage is also convenient for the local secondary school, health centre and neighbouring Skelmersdale, which has a post office and several supermarkets.

The property is just four miles from Wigan and there is easy access to the M58 and the wider motorway network. Upholland Railway station runs hourly services to Manchester, Blackburn and Kirkby.

Bran Cottage is to be sold by conditional online auction, ending at noon on Tuesday 21 May, with a minimum starting bid of £139,000. For viewings and further information, please contact Miller Metcalfe on 01942 466079 or email hindley@millermetcalfe.co.uk.