You are here: Home Latest News Halloween horror house set for spooktacular transformation after being snapped up at auction for £181,000

Halloween horror house set for spooktacular transformation after being snapped up at auction for £181,000 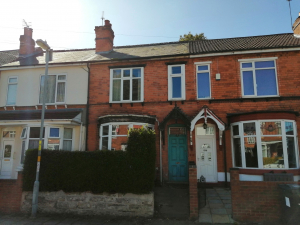 Despite its appearance, buyers were not spooked by a hair-raising house of horrors which was snapped up at auction two days before Halloween.

The property at 93 Douglas Road in Acocks Green, Birmingham cast its spell on bidders and is now set to receive a spooktacular transformation after being sold by SDL Auctions Bigwood at Villa Park in Birmingham on Tuesday 29 October.

With features such as holes in the roof, a wash basin hanging off the wall, fallen plaster and heaps of rubble, the terraced house had a *guide price of just £1+ to reflect its condition.

But property buyers are made of sterner stuff and, after a bout of rapid bidding, the house was sold for £181,000.

Auctioneer Andrew Parker was at the rostrum. He said: “We knew this property would attract some serious bidding and were not disappointed.

“Serious property developers relish a challenge and will have looked beyond this house’s outward appearance. The property actually has a lot going for it. Although it’s in a pretty poor state right now, it retains some beautiful period features such as cast iron fireplaces, a bay window and picture rails. I’m sure the new owner will work their magic on it and it will be unrecognisable from the ‘house of horrors’ you see today.”

The traditional terraced property has two reception rooms with 1930s fireplaces, and French windows leading into the good-sized but overgrown rear garden. Upstairs are three bedrooms – two with original cast iron fireplaces – and a bathroom.

Andrew added: “The foundations are all there for a lovely family home to be revealed, admittedly after a great deal of work and investment. But the rooms are well proportioned, the bathroom is upstairs – a bonus in a property of this age – and there’s a garden at the rear.

“Combine this with a great location within walking distance of shops, amenities and Acocks Green Railway Station, and you have a property which, once completed, will make a great family home or rental property.”

SDL Auctions Bigwood will be back at Villa Park, Birmingham, for its final auction of the year on Wednesday 18 December. To enter a property into the auction, or to book a free auction appraisal, click here or call the auctions team 0121 233 5046.