You are here: Home Latest News Hair salon purchases cut and dried at the fall of the hammer 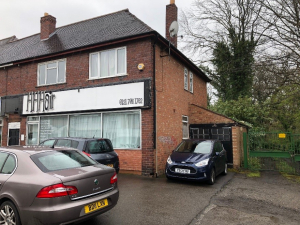 Two hairdressing salons are among the highlights of the commercial property offerings in SDL Auctions Bigwood’s May auction to be held at Villa Park, Birmingham, on Thursday 23 May.

The properties – one of which is let and one vacant – will feature in a bumper auction catalogue combining lots to be sold at Villa Park and those being offered via online auction.

Auction valuer Chris Theocharides, of SDL Auctions Bigwood, said: “These are just two of the commercial properties which are due to be sold in our May auction, and show some of the variety available. Lots such as the Worcester salon allow landlord investors to hit the ground running with tenants already established, while a property such as the vacant former salon in Olton provides scope for a variety of uses.”

The vacant salon, 44A Castle Lane, Olton, near Solihull, which has a *guide price of £155,000+, is a mixed-use two-storey property has space for an extension and could be used in a variety of ways, subject to planning permission.

Formerly housing the hair salon, the ground floor extends to around 67 square metres, plus a kitchen area and WC. There is access to a rear garden and the property also has a garage to the side and parking at the front.

The first floor has three double rooms, a bathroom and kitchen, offering a great deal of potential, according to Chris.

He said: “Access to the first floor is currently via an internal staircase but with the appropriate planning permission we believe this could easily be reconfigured to provide separate access, creating a self-contained apartment which could be let to a separate tenant and maximising returns.

“Alternatively, the location of the property – which is at the end of a small parade of retailers by the canal in a largely affluent residential area – means it could lend itself to full conversion of both floors to a domestic dwelling. There is also the possibility of extending to the side, again, subject to planning permission. Whoever buys this lot will find they have a number of options to consider.”

The location is convenient for both commercial and residential tenants, being close to supermarkets, parks, the amenities of nearby Solihull and Birmingham International Airport.

Meanwhile, down in Worcester, a city centre freehold property is offered for sale with two hairdressing tenants in place.

The mid-terraced property is occupied by Worcester Hair Extensions Limited on the ground floor, which comprises a trading area, second treatment room, WC and a large rear storage area which could be configured into a further trading or treatment area.

Angel Street is in the heart of Worcester, close to the railway station and Crowngate Shopping Centre.

Chris said: “This property is in the centre of the main retail area of this vibrant city so should provide a good income for the owner for many years to come. What’s more, by buying at auction, you get transparency and certainty with no lengthy delays; the deal is cut and dried at the fall of the hammer, and completion takes place within 28 days.”

If you have a property you wish to sell and would like to consider the hassle-free auction route, entries are still being accepted for the Thursday 23 May auction at Villa Park. To find out more, or to request a free auction appraisal, call the team on 0121 233 5046 or click here.