9th December 2013 – Graham Penny Auctions, the number one property auction house in the Midlands*, has won another national property award – its third in two months.

Graham Penny Auctions was presented with the silver award for Best Auction Agency at the prestigious Estate Agency of the Year Awards in association with The Sunday Times and The Times, sponsored by Zoopla on Friday afternoon.

“This year we were named number one property auction house in the Midlands, we’ve sold more properties than ever before, we’ve achieved great prices for our clients and now we’ve won our third award in two months.” 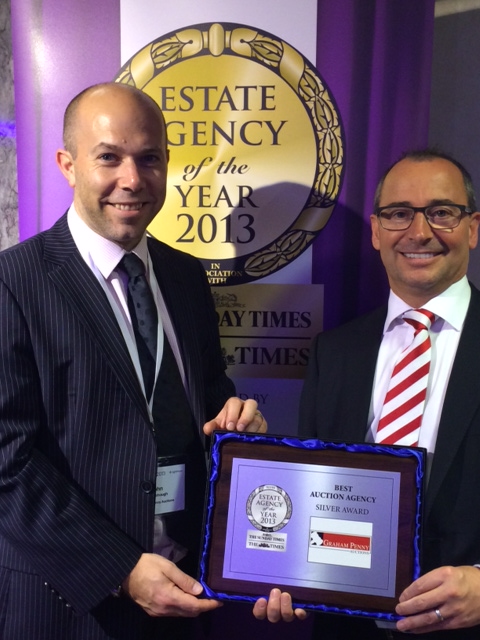 The judges were impressed by the attitude of the team at Graham Penny and commented: “Extremely helpful and knowledgeable, they were able to explain the auction process clearly and simply whilst emphasising the advantages it provides. Since this business was found in 2006, it has not lost a single member of the team which demonstrates how valued each employee feels.

“As the dominant auction house in their region the directors are keen to embrace modern practices; they want the auction process to be seen as a real alternative to the traditional methods of selling a property so the auction rooms are modern and inviting. They use television screens in the showrooms with proceedings broadcast online: online bidding is also being introduced as a response to customer feedback. This year has seen the business expand to a third branch and the panel has no doubt this growth will continue.”

Andrew added: “The whole team across Derby, Nottingham and Leicester work tirelessly all year round and we’re all so proud to be placing another award on the wall.”

*based on essential information group statistics. Based on lots offered, lots sold, revenue raised for 2012.