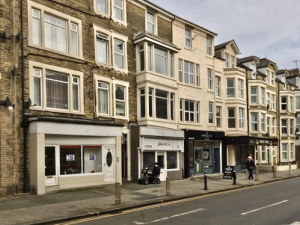 A ready-made portfolio in an up-and-coming town is one of the investment opportunities being offered by SDL Auctions North West at its first Manchester auction of the year.

Four apartments in the same block in Morecambe are to be sold as separate lots at the Thursday 27th February auction at the AJ Bell Stadium.

The four properties are in an attractive parade of buildings in Euston Road, just a five-minute walk from the seafront and the famous Eric Morecambe statue. Each of the one bedroomed properties has electric heating and double glazing and is currently let at £390 per calendar month.

Head of auctions North West at SDL Auctions North West Andy Thompson said: “What a fantastic opportunity for a landlord. These lots are all attractively priced and enable an investor to create a valuable portfolio not just in the same town but in the same building. They are, however, being sold separately, so buyers can plan their investment according to their budget and requirements.”

The four properties are:

The properties are well positioned for transport links, including Morecambe Railway Station and the bus network, as well as Morecambe town centre with its good range of shops and amenities, which include the Arndale Morecambe Shopping Centre.

Nearby leisure facilities are plentiful and include Morecambe Leisure Park, beaches, pubs, restaurants and a golf club.

And the town is considered to be a rising star when it comes to investment, thanks to proposals for the £85million Eden Project North.

Similar to the hugely successful Eden Project in Cornwall, the project aims to combine entertainment and education on a coastal theme in five giant “mussel-shaped domes” and it is hoped it will open in spring 2023.

Andy added: “Eden Project North can only be good news for Morecambe, as it is predicted to attract an estimated 760,000 visitors per year, which will provide a huge uplift for the local economy, creating jobs and boosting all kinds of business, from shops and restaurants to landlords letting properties in the area.”

The four Euston Road apartments will be sold by SDL Auctions North West at its first Manchester auction of the year at the AJ Bell Stadium on Thursday 27th February. To find out more about the apartments, or any of the other properties in the 50-page auction catalogue or call 0161 774 7333.