You are here: Home Latest News Former tailor’s shop due is for a restyle

Former tailor’s shop due is for a restyle 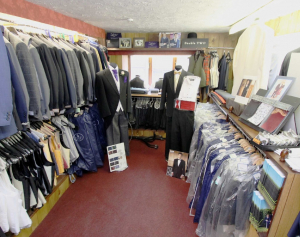 A former tailor’s shop in Northamptonshire has planning permission to be refashioned into a character cottage – making it perfect for the investor looking for material gain.

Believed to be one of the oldest properties in Rushden, Bantin the Tailors Limited, 29 Fitzwilliam Street, is offered for sale via conditional online auction by SDL Auctions in partnership with Simpson and Weekley.

The stone-built premises are detached and extended, with gardens to the side and rear, and a long history of use as a shop. Originally a barn, in the late 19th century it was converted to a shop by George Chettle who sold pet food in one half, while his daughters Vi and Minnie sold sweets in the other. The space above was used as an engineering workshop.

Following a total refurbishment of the building, Bantin the Tailor moved into the shop in 1990 and remained there until September 2018 when, after a lifetime in the clothing industry, business owner Michael Bantin announced his retirement.

Jason Lee, national sales manager at SDL Auctions, is impressed by the property’s potential and expects it to attract a great deal of attention as planning permission was granted in January for conversion to a residential property.

He said: “This is a property packed with character which is also a piece of Rushden history. It offers a wide range of possibilities, which means it will be attractive to investors and private buyers alike.

“As a retail outlet it occupies a prominent town centre position, making it an attractive commercial property but the style of the building – plus the fact that it is not listed – means it could be converted into a two-bedroomed cottage with just a simple change in layout.”

As it stands, the shop is split level, with two retail areas and a fitting room/cloakroom. A seating area currently hides the WC, while a hand basin is concealed behind boxing-in. The hallway currently has clothes rails and has stairs to the first floor.

Upstairs, the landing leads to a kitchen area, with work surfaces, cupboards and sink with drainer. A workshop/office has a wall-mounted gas heater and access to the loft space.

Outside, the garden wraps around the back and side of the property, with boundary stone wall and fencing.

The property is situated at the end of Fitzwilliam Street, where it meets Duck Street, which has similar stone cottages adjoining the plot. Amenities are plentiful, with independent shops, major supermarkets, medical centres, a post office, public swimming pool, pubs and restaurants all nearby. Rushden Museum reopens for the season on 4 May and holds exhibitions about the history of the town.

A major addition to the town has been the Rushden Lakes Shopping Centre and leisure complex, which is home to a wide variety of major high street retailers and restaurant chains and is still growing, with a multiplex cinema due to open this summer.

For commuters, Rushden is well placed, with a railway station at nearby Wellingborough making it commutable to London. The town has good access to the A6 and A45, putting Bedford, Northampton and the M1 within a half-hour drive.

Bantin the Tailors is offered for sale by conditional online auction with a starting bid of £132,000 and ending on Thursday 25 April. For more information and viewings, please contact Simpson & Weekley on 01933 224953 or email wb@simpsonandpartners.co.uk.