You are here: Home Latest News Former history centre and pubs among commercial lots to be sold at property auction 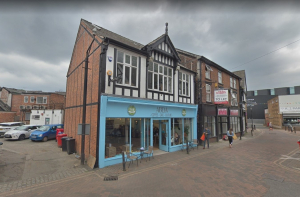 Two former pubs and an old school building are among the commercial property investment opportunities featuring in the latest SDL Auctions Bigwood auction catalogue and going under the hammer this month.

The bumper catalogue features 125 lots, including 66 being sold under the hammer in the Villa Park auction room, plus dozens more by online auction and which are available to bid on now.

One of the most notable lots due to be sold at Villa Park on Thursday 21 March is the former Local History Centre, Essex Street, Walsall after the centre’s archives were moved to the Lichfield Street Hub in the town centre.

With a past that includes life as a school, the property could now have a bright future as its size and scope make it suitable for a number of uses, including residential, subject to the relevant planning permissions. The lot, which has a *guide price of £300,000+, comprises the former school, a detached former caretaker’s house and adjoining land extending to 0.6 acres.

Two more buildings with a previous life are two former pubs. First to go under the hammer is The Horse & Groom, Barnsley Road, Goldthorpe, near Rotherham. This two-storey detached public house has residential accommodation above and sits in the centre of a large car park. It has potential for change of use or redevelopment, subject to planning permission, and a guide price of £114,000+.

The other former pub, 78 Waterfall Lane, Cradley Heath, with a guide price of £145,000-£155,000, has already been partly converted into a home and has a significant amount of space to the side which would be suitable for development, subject to permission. The property currently has a large open plan living room, kitchen, WC, storage facilities and a food preparation area on the ground floor. Upstairs are two bedrooms, bathroom and a lounge which could be used as a third bedroom. Alternatively, the space could be reconfigured as a self-contained apartment with separate entrance, subject to planning permissions.

Commercial units going under the hammer include 6 Crown Street, Northwich, Cheshire, a two-storey property currently fully occupied by Abda Café and producing a rental income of £15,000 per year. It occupies a prominent town centre position close to the New Barons Quay Shopping Centre and has a  guide price of £125,000+.

Another commercial unit in a prominent position is the mixed-use 38 Worcester Road, Bromsgrove, which has a guide price of £140,000-£150,000. The three-storey mid-terraced property houses a popular Caribbean takeaway on the ground floor and has a substantial rear storage facility currently let as part of the retail unit but which has the potential to be let separately in the future. Currently, the unit is just over a year into a five-year lease with an annual rent of £10,500.

Above is a self-contained two-storey apartment which has been renovated to a high standard. It has gas central heating and features a kitchen, large lounge, two bedrooms and a bathroom.

Further south in Evesham, 36 Port Street is another mixed use property in a prominent location. Currently producing a rental income of £12,000 per year, the property comprises a ground floor retail unit with rear store and WC, and on the upper floors, a self-contained two-storey flat requiring some modernisation. The retail unit is believed to be let at £550 per calendar month, while the flat is let at £450 per calendar month; if purchased at the guide price of £80,000+, this would produce an excellent yield of 14%.

Auctioneer Rory Daly said: “We have some really great lots going under the hammer in March and we are looking forward to getting some great prices for our sellers, after raising £7.8m at our February auction.”

It’s been an excellent start to the year for SDL Auctions Bigwood, which has once again topped the league table of property auctioneers in the West Midlands – a position it has held for more than 10 years – by offering and selling the most lots and raising the most in sales, according to data produced by the Essential Information Group. During 2018, SDL Auctions Bigwood raised over £60m more and sold over 300 more lots than its nearest West Midlands competitors.

Rory has even more reason to celebrate, having returned to the rostrum after a year away and being given the all clear from bowel cancer.

He said: “It’s fantastic to back in the auction room, connecting buyers and sellers and helping them achieve a truly straightforward property transaction. Buying at auction is hassle-free, with no lengthy chains and with the certainty that, when the hammer falls, the contract is legally binding. Within just 28 days, completion will have taken place.”

For details of any of the 125 lots in the March auction catalogue, or to bid online, click here.