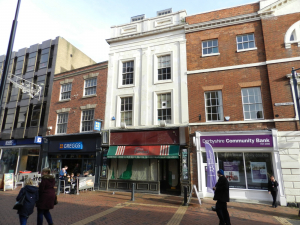 The former Frankie & Benny’s restaurant in Derby city centre is going under the hammer next week, with conversion plans to create seven apartments and two shops.

39 Cornmarket, in the heart of the city centre close to the Guildhall, is one of more than 60 lots in SDL Auctions Graham Penny’s last auction of the year in Derby on 15 December.

The four-storey property, which has planning permission for conversion into seven apartments and two separate retail units, has a *guide price of £350,000+.

Robert Stone, senior valuer at SDL Auctions Graham Penny, said: “This is a rare and exciting opportunity to own what could be a major development in Derby city centre.

“When all apartments and retail units are fully let, we would estimate a rental income of approximately £70,000 per annum when renovated.”

There is also the possibility of adding an eighth apartment by constructing an extra internal floor, and this could result in another £6,000 rent a year, subject to planning permission.

Other commercial properties on offer in the auction include:

Mr Stone added: “We have a wide range of commercial property lots to suit all buyers, and are looking forward to what we think will be a busy day of competitive bidding.”

The SDL Auctions Graham Penny auction takes place at Pride Park Stadium on Friday 15 December, and the catalogue of 61 properties can be viewed here.