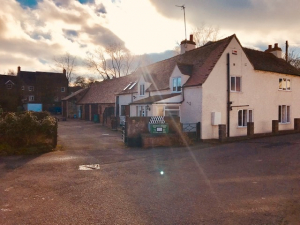 A former farmhouse with separate annexe and outbuildings on a large plot could provide an excellent opportunity for development when it goes under the hammer at SDL Auctions Graham Penny’s next auction at Pride Park Stadium, Derby.

8 Main Street, Breedon on the Hill has a *guide price of £225,000+ and sits on the Derbyshire/Leicestershire border, ideally placed for commuters, having easy access both to the motorway network and to East Midlands Airport. The location, coupled with the size and scope of the plot, gives it excellent potential for redevelopment, subject to planning permission.

The freehold property is the former site of Brookside Caravans, which sold caravan parts and carried out servicing and repairs. The company has now closed due to retirement.

As it stands the former farmhouse – which has part LPG central heating and part uPVC double glazing – comprises on the ground floor a porch, entrance hall with under-stairs storage cupboard and French doors leading through to the lounge with marble hearth and exposed beams, separate dining room (occasionally used as a guest bedroom), refitted breakfast kitchen with beamed ceiling and built-in appliances, utility room and guest cloakroom. Upstairs, there is a family bathroom with corner bath, plus two double bedrooms, one of which leads to an office that has its own separate staircase from the ground floor and could potentially be used as a third bedroom.

Outside, a number of outbuildings include a brick-built double garage, a workshop featuring two rooms incorporating a kitchenette and WC with mezzanine floor, a pre-fabricated garage, plus other block and part block-built ancillary outbuildings. There is a concrete hard standing area and an enclosed south-facing garden with vegetable plot offering a certain degree of privacy.

Robert Stone, senior valuer at SDL Auctions Graham Penny, said: “This is a property with everything to offer for a very appealing guide price. The lovely old farmhouse could make a fantastic family home, or the site could be developed to maximise its potential, subject to the usual planning consents. A former cow shed, which has now been demolished, had planning permission for a two-bedroomed detached home, so this could perhaps be reactivated.

“Breedon on the Hill is a really popular village, not just for its transport links but in its own right due to its history and its amenities, which include pubs, village school and a post office with shop.”

The village is known far and wide for its landmark Priory Church of St Mary and St Hardulph, originally founded as a monastery in the 7th century. It stands on the top of Breedon Hill, within the remains of The Bulwarks, an Iron Age hill fort.

The farmhouse will be sold at SDL Auctions Graham Penny’s auction on Thursday 11 April at Pride Park Stadium and will feature in a bumper East Midlands auction catalogue featuring lots from Derby, Leicester and Nottingham, as well as those being sold via online auction. Entries are still being accepted; for a free auction appraisal of your property, click here or call the team on 01332 242 880.