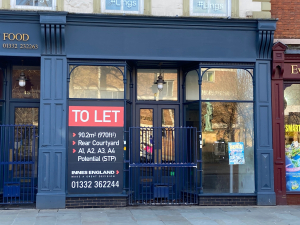 The former home of Derby’s Padley Centre charity shop was among the commercial properties sold in front of a packed auction room at Pride Park Stadium.

It was the first Derby auction of the year for SDL Auctions Graham Penny and got the new season off to a spectacular start, raising £3m for sellers and selling 86% of the properties offered.

Auctioneer Andrew Parker said: “It was fabulous to be back at Pride Park in front of such a huge crowd of bidders, all eager to get back into property buying after the Christmas break.”

The former Padley Centre shop, 12 Sadler Gate in Derby, is in a prestigious area of the city, offering a shop on the ground floor with changing room and storage, with two floors above providing a kitchen area, WC and office or storage space.

Staying in the city’s Cathedral Quarter, two adjoining properties on Wardwick were snapped up by bidders in front of the Homes Under the Hammer BBC TV cameras.

First to go under the hammer was the smaller of the two properties. Abbey Fast Food, 45 Wardwick, is a former takeaway premises within a handsome parade of Grade II listed buildings. Previously trading as Abbey Fast Food and Wardwick Fish Bar, the property features a 400 sq ft ground-floor unit including sales area, kitchen and storage, and sold for £66,000 from a guide price of £60,000+.

Next door, 47 Wardwick in Derby is in the same parade of Grade II listed buildings and features a retail area of around 1,000 sq ft, with a private rear garden and cellar, making it ideally suited to a bar or restaurant, subject to the necessary planning permissions. It sold for £92,500 from a guide price of £75,000+.

Auctioneer Andrew Parker was unsurprised that the properties sold well.

He said: “All three of these commercial properties are in an attractive part of Derby, surrounded by high-end shops, restaurants and bars. The buyers have made wise investments and I look forward to seeing the new businesses they will be bringing to the Cathedral Quarter.”

Plots of land proved popular at the auction, too, and land adjacent to 23 Wimbledon Road in Mackworth, sold particularly well, achieving £23,500 from a guide price of £8,000+.

Further out of the city in Kirk Langley, a plot of paddock land attracted enthusiastic bidding. The rectangular eight-acre paddock land at Flagshaw Lane has vehicular access and sits on the north side of the popular village, which has easy access to Derby and Ashbourne via the A52. The land sold for £70,000 from a guide price of £50,000+.

But it was a more unusual lot which started the bidding at SDL Auctions Graham Penny’s first Derby auction of the year.

A Derby County football shirt, signed by the players, was sold for £225 as part of auctioneer Andrew’s fundraising efforts for the Make A Wish Foundation. Andrew and his wife Rachael will be running the London Marathon in April to raise money for the charity, which provides unforgettable experiences for children and young people battling life-threatening conditions.

Andrew said: “Selling the shirt was a fantastic way to get our auction proceedings under way and we’re grateful to everyone who bid and especially to our winning bidder for donating so generously.

“The property auction was a huge success, too. We sold a good variety of houses, flats and commercial properties, beginning our 2020 auction season on a high note with an 86% success rate. Plus, due to the speed and security of auction, buyers will take possession of their new properties in just 20 working days.”

The auctions team at SDL Auctions Graham Penny are already taking entries for the next Derby auction, which takes place on Thursday 26th March. But sellers in a hurry need not wait until then, as properties can be sold via online auction at any time.

To find out more about which method of auction is best for your property, or to request a free no-obligation auction appraisal of your property, click here or call 01332 242 880.