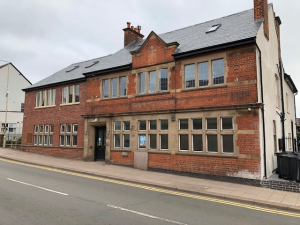 A former bank in Coalville is to be sold for the second time by SDL Auctions after undergoing a spectacular transformation.

Since buying the property in 2017, the current owner of 47 Belvoir Road in Coalville has recently completed the redevelopment of the property, creating eight flats and two retail units. Almost exactly three years after it last sold, it is due to go under the hammer in this month’s national property auction with a *guide price of £795,000+.

Carl Finch, senior valuer at SDL Auctions, said: “It is always a pleasure to see how properties are transformed after being sold in one of our auctions – and even more so when they come back to us to be sold again. This was a great investment for the current owner back in 2017 and represents a superb opportunity for a new buyer now, with the potential for high yields.”

Formerly the Natwest Bank, the three-storey property features eight flats – seven with two bedrooms and one large one bedroomed flat – all featuring a hallway, living kitchen, bedroom accommodation and a shower room. In addition there are two retail units with A1 (retail) use on the ground floor, accessed from a communal reception area, and each with their own WC. A large block-paved car park provides nine spaces behind a secure gate.

The property is in the heart of the town centre, close to shops, bars, restaurants and parks. It is just a short walk from Coalville Community Hospital and around a 20-minute drive to Glenfield Hospital.

Carl added: “The location of this property, along with its parking facilities, mean it is sure to be popular with tenants looking for a central location close to employment opportunities. And, with five of the apartments already let, it’s a chance to get up and running earning an income straight away.”

There have been many changes since the former bank was sold by auction three years ago. SDL Auctions, too, has experienced a transformation, having grown to become the UK’s most successful live-streamed auctioneer**. This month, SDL Auctions presents a bumper catalogue of 203 lots, the first time a UK auctioneer has offered more than 200 lots in an August auction since 2008.

The properties will be sold in the national property auction on Thursday 27th August, live-streamed to thousands from SDL Auctions’ head office auction studio, with the combined talents of auctioneers Andrew Parker, Graham Penny and Rory Daly.

To register to bid on 47 Belvoir Road by proxy, by telephone and on the internet, click here.