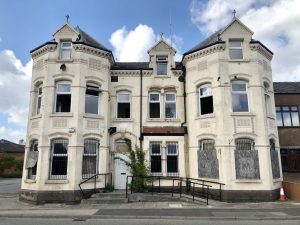 The former NatWest Bank and Conservative Club in Stretford, Manchester was the star performer in SDL Auctions North West’s May auction at the AJ Bell Stadium.

Andy Thompson, senior valuer at SDL Auctions North West, said: “It was another successful sale which raised over £1.5 million and saw good results for both our private sellers and a number of lots sold on behalf of receivers.”

The property at 20/20a King Street in Stretford included both premises in one lot, and was described as suitable for redevelopment, including residential conversion, subject to planning permission.

A residential development opportunity with lapsed planning permission for conversion into ten apartments, it had a guide price of £100,000-£125,000 and sold for £206,000.

Edward Feather, senior valuer and auctioneer, said: “This was an encouraging auction that once again proved the popularity of selling by auction, whether you are bidding in the room, by telephone or online.

“Buyers are recognising the value that can be found in our auctions and this bodes well for our future auctions in the North West.”

SDL Auctions North West’s next auction is on Monday 23 July at the AJ Bell Stadium and anyone looking to sell under the hammer can call the team on 0161 774 7333.