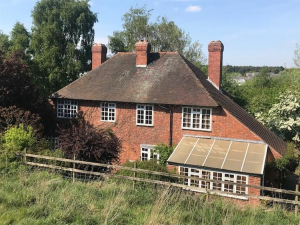 A character-packed cottage which was formerly part of the Annesley Hall Estate has been sold at auction by SDL Auctions Graham Penny.

Described by auctioneers as “something a bit special”, 1 Mansfield Road, Annesley, features exposed beams and Victorian cast iron fireplaces and sits in a secluded position backing onto open countryside.

The five bedroomed detached cottage was once two separate cottages and could be converted back with the necessary planning permission or kept as a large family home. After some eager bidding, it sold at auction for £248,000 from a guide price of £180,000+.

It was the third auction of the year held by SDL Auctions Graham Penny at Nottingham Racecourse and bidding got off to a lively start with 16 Glaisdale Drive East, Nottingham the first under the hammer. The three bedroomed semi-detached property of non-standard construction sold for £94,000 from a *guide price of £50,000+.

Managing director and auctioneer Andrew Parker said: “Auction is the perfect place to sell a property such as this, which is of non-standard construction so may have struggled to sell by private treaty.”

“Having said that, there is no such thing as a typical auction property, as the rest of the auction proved – with lots ranging from your classic doer-upper through to commercial premises, properties which are ready to move into and one-of-a-kind homes such as the Annesley cottage.”

Indeed, landlords, developers and private buyers were keen to show their confidence in Nottingham – recently named as the city with the highest rental growth in England** – by snapping up properties of all types at the auction, which raised over £2million for sellers.

Another large home which provided popular was 28 Maidstone Drive, Wollaton, an extended four bedroomed bungalow which attracted many viewings before the auction and sold for £185,500 from a guide price of £175,000+. The garden requires some improvement but the property itself is ready to move into, with new décor, carpets and modern kitchen and bathrooms.

Not all the homes were houses; an apartment which sold under the hammer was Flat 36 Southchurch Court, Clifton, which is on the fifth floor and currently let at £400 per calendar month. From a guide price of £40,000+, it sold for £44,000.

A particularly versatile commercial property in Sutton-in-Ashfield drew in the bidders, too. 7 Beighton Street, Sutton in Ashfield, comprises offices and workshops, providing the potential to be used for a wide range of businesses plus residential conversion, subject to planning permission. The two-storey mid-terraced property sold for £73,500 from a guide price of £46,000+.

Andrew added: “It’s always satisfying to sell properties under the hammer, as we know that both buyer and seller can expect a hassle-free, transparent and fast transaction. Contracts are exchanged at the moment the hammer falls, and completion will usually take place within 28 days. No fuss, and no delays – what more could you ask from a property sale?”

Entries are now being invited for the next Nottingham auction, to be held on Friday 9 August at Nottingham Racecourse. Properties can also be sold by online auction at any time. To request a free auction appraisal, call the team on 0115 958 8702 or click here.