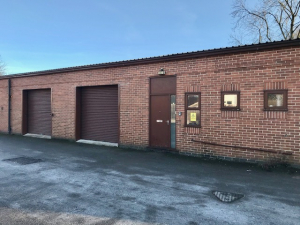 A plot of land with garages which auctioneers have described as “an exceptional opportunity” is one of the commercial highlights of SDL Auctions Graham Penny’s first Derby auction catalogue of the year.

Land, commercial units and garages to the rear of 6 Arthur Street in Derby will be sold at Pride Park Stadium, Derby, on Friday 14 February, as part of an eclectic collection of lots going under the hammer.

The plot, which has a *guide price of £185,000+, is in highly sought after city centre location close to Darley Park and has planning permission for five unique loft-style townhouses with off-road parking.

The site currently consists of 14 garages and two commercial units. The plans allow for the demolition of the garages to provide four new homes, as well as the alteration of an existing two-storey outbuilding to form a further dwelling.

Head of auctions East Midlands Robert Stone said: “This is a truly exceptional opportunity to build five high-grade houses in a prime city location, with vaulted ceilings, two double bedrooms a Jack and Jill bathrooms. We’re expecting a great deal of interest in this lot as it’s such an excellent investment.”

A smaller plot of land is available on the edge of the city in nearby Mackworth.

Land adjacent to 23 Wimbledon Road, which has a guide price of £8,000+, is a generous sized parcel of land with gated access and a larger-than-average garage. It features a garden mainly laid to lawn and a boundary hedge providing a degree of privacy.

The plot sits within an established residential location so may be suitable for a new dwelling but no such planning permission exists so auctioneers advise anyone interested to make their own enquiries before bidding.

In Ashbourne, three commercial units within the same industrial estate are due to go under the hammer, being sold in two lots.

Up first is Unit 6, Henmore Industrial Estate, Mayfield Road in Ashbourne, featuring 800 sq ft of office space, storage, mezzanine floor and WC. The outside space extends to approximately 900 square feet, currently used by a car wash company, which rents the unit at £18,000 per annum on a 10-year lease which began in 2016. The unit has a guide price of £160,000+.

6a & 6b Henmore Trading Estate are two single-storey modern commercial units producing a combined annual income of £8,500. 6a has an internal floor area of around 580 square feet, while 6b extends to just under 1,300 square feet.

Both of these lots have communal parking and are on the fringe of Ashbourne with excellent nearby road network connections.

These are just some of the commercial and development opportunities available at the Valentine’s Day auction, which kicks off the new season for Derby’s most successful property auctioneer. In 2019, the auctioneer raised 121% more in sales than its nearest city competitor and increased the number of lots sold by 24% compared to the previous year.

Robert added: “We have 47 lots, including houses, flats, retail units and land, going under the hammer, with something to suit all budgets, and we are all looking forward to returning to Pride Park Stadium to get our Derby auction year off to a successful start.”

For more information on any of the properties, view the auction catalogue online or click here, where you can also find information about bidding online, by phone or by proxy.