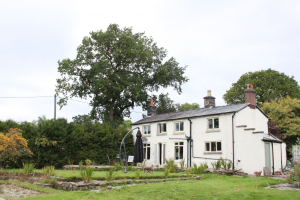 A four bedroomed detached period house in Cheshire is currently attracting bids in an online auction held by SDL Auctions in partnership with Hinchliffe Holmes.

Downdale, Morreys Lane, Kelsall, is a stone-built property in need of modernisation offering a great deal of potential, thanks to its size and its south-facing position on a 0.6-acre plot which previously housed a cattery.

The property is being offered for sale by conditional online auction from a starting bid of £505,000 with the auction ending on Friday 12 April.

Situated about a mile from the edge of Delamere Forest in a quiet location in the heart of the Cheshire countryside, the property offers a huge amount of scope for development, subject to planning permission.

Jason Lee, national sales manager at SDL Auctions, said: “Downdale has a great deal to offer, whether you want a beautiful family home in a spectacular setting or want to tap into the space on offer to build a business, with the required planning permission, of course.”

Character features include exposed beams in many of the rooms, including the large reception hallway, at the centre of the house. Off this hallway is a spacious lounge/dining room which has feature beams, an open fireplace with brick surround and double doors to the rear garden.

Next to this room is the kitchen with its range of cream fitted units and across an inner hallway is a further reception room, currently used as a fourth bedroom, with built-in wardrobes. Opposite the kitchen is a ground-floor shower room.

Outside there is a boiler room and extensive gardens including a gravelled driveway providing parking for several vehicles.

Morreys Lane is a quiet semi-rural setting within easy access to major roads and the motorway network, making it ideal for commuting to major cities such as Manchester and Liverpool. There are railway stations at nearby Hartford, Cuddington, Frodsham, and Chester, all operating on either the Chester to Manchester or Liverpool to London lines. Two international airports – Liverpool and Manchester – are within a 45-minute drive.

The village of Kelsall itself is extremely popular with house-hunters, thanks to its excellent range of amenities – which include a medical centre, Co-Op supermarket, post office, churches, play area, pubs and a café – and its superb position in some of Cheshire’s most picturesque countryside. Both the village primary school and the nearby Tarporley High School have been rated outstanding by Ofsted.

The wider area has much to offer, too, with Delamere Forest on the doorstep, as well as ancient castles and, on nearby canals, boating facilities. Walking in the area is so highly rated that the nearby Willington and Utkinton Hills are known as “Little Switzerland”.

Jason added: “This is a really beautiful part of the country, offering the best of all worlds. You have the quiet of the countryside surrounding the property but are by no means isolated, as city attractions are within easy reach. What more could you want from a home?”

Downdale is offered for sale by conditional online auction by SDL Auctions in partnership with Hinchcliffe Holmes, ending on Friday 12 April. For more information, please contact Hinchliffe Holmes on 01606 330 303 or email northwich@hinchliffeholmes.co.uk.