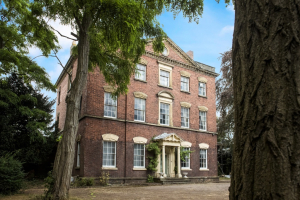 A Grade II-listed manor house in the Black Country with its own 49-seat cinema was sold for £318,000 in SDL Auctions Bigwood’s December auction in Birmingham.

There was competitive bidding for the 18th century Wordsley Manor which lies between Stourbridge and Kingswinford, which had a *guide price of £230,000+.

Andrew Parker, auctioneer and managing director at SDL Auctions Bigwood, said: “This was an exciting and unusual lot to go under the hammer and it brought a series of competitive bids resulting in an excellent price.”

Built in 1727 for the Holts, a family of Black Country industrialists, the six bedroomed property on Meadowfields Close in Wordsley boasts around 7,464 sq ft of space over four floors in about 1.5 acres of grounds.

The east and west wings of the manor house had fallen into disrepair in recent years, but originally featured stables, a coach house and brewery.

However, the property could now benefit from its own sale, as the new owner has planning permission to build and sell 14 houses on the site – as long as they carry out up to £400,000 of restoration works on the Manor building.

Andrew added: “This was just one of a series of successful lots on 12 December which raised over £5.3 million.”

SDL Auctions Bigwood’s next auction is on Thursday 14 February at Villa Park. Anyone looking to sell under the hammer can call the team on 0121 233 5046.