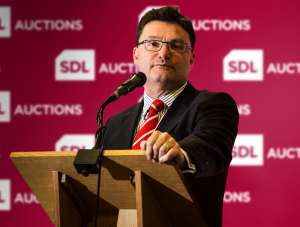 Birmingham’s reconfirmed position as one of Europe’s leading property hotspots is helping to drive the success of auctions in the West Midlands, an expert has claimed.

The 2018 Emerging Trends in Real Estate Europe report, published today [2 November] by PwC and the Urban Land Institute, once again ranks Birmingham as one of the highest-ranking UK cities for investment prospects – ahead of London and Edinburgh.

Based on the opinions of over 800 real estate professionals in Europe, Birmingham was ranked 21st, up one place from last year and ahead of Edinburgh at 26th and London at 27th.

The news comes just after SDL Auctions Bigwood raised £17.6 million at its latest auction in Birmingham on 18 October – the second highest total ever recorded in the West Midlands.

“This ongoing prestige means that property auctions in the city are becoming more and more popular, as investors want a slice of the valuable cake that’s been baked in this great city.”

A total of £135 million has been raised by SDL Auctions across the UK so far in 2017 with £70 million raised in the SDL Auctions Bigwood Birmingham auction alone. Another busy auction room is expected at the next auction at Villa Park on 14 December.

The new 2018 Emerging Trends report suggests that Birmingham’s improved position could be in part due to investor cautiousness of overpriced properties in London, with regional cities being seen to provide better growth prospects.

Mr Daly added: “Despite Brexit uncertainty hitting London, there’s a confidence exuding from Birmingham that spreads across the West and the East Midlands, and this is something SDL Auctions Bigwood is seeing as a major growth factor in its business.

“There certainly couldn’t be a better time for owners seeking to sell their properties, and we’d like to invite them to join us on what we think will be another bumper day next month.”

Property owners interested in entering a property in the next SDL Auctions Bigwood auction on 14 December can request a free auction appraisal by calling 0121 233 5046 or emailing Birmingham@sdlauctions.co.uk.