You are here: Home Latest News Art deco tower will appeal to developers with lofty ambitions

Art deco tower will appeal to developers with lofty ambitions 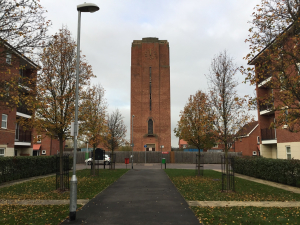 Bids are expected to flood in for a building known as the Water Tower near Newark, with planning permission for conversion to apartments.

The iconic art deco building, in Goldstraw Lane, Fernwood, is due to be sold by SDL Auctions Graham Penny at Nottingham Racecourse on Tuesday 9 April, with a *guide price of £130,000+.

Despite being known locally as the Water Tower, the building was originally constructed in the 1930s as a chimney and is the only surviving section of the former Balderton Hospital.

It is a well-known landmark in the area and locals have been keen to see it preserved. Previous plans to demolish the building were rejected, as it was deemed to have been a loss to the area.

Developers with lofty ambitions are likely to be drawn to the property as it now has full planning consent for a range of 13 generously sized one and two-bedroomed apartments on the site, including two in the tower itself.

As well as the two apartments within the tower, permission has been granted for three new-build units within proposed “wings” to the tower and a further eight apartments in two new blocks within the L-shaped grounds.

The tower is an imposing focal point in the new Fernwood residential development on the outskirts of the popular village of Balderton, two miles south of Newark. It is an active community with regular social events in the village hall, a petanque club, tennis courts and an amateur dramatics group, among others. The village also has a primary school, local shop, a pub and restaurant, plus a gym with a popular café.

Further amenities are in neighbouring Balderton, which has supermarkets, a health centre and a secondary school.

Beyond Balderton is Newark, which has a wide range of shops and restaurants, hospital, multi-screen cinema and theatre, plus a railway station offering a range of services, including journeys to London, Grantham and Doncaster.

As well as the railway station, road links are excellent, with the A1 being on the doorstep of Fernwood, providing speedy access to Grantham and beyond, and the A46 being within easy reach, linking the area with Nottingham and Lincoln.

Nick Trow, valuer at SDL Auctions, said: “This unique building is ready and waiting to have new life breathed into it. It’s a notable landmark in the area and, once it has been converted to apartments, it could become one of the most desirable addresses in Fernwood.”

The tower, which has a guide price of £130,000+, is just one of many properties to go under the hammer at SDL Auctions Graham Penny’s auction at Nottingham Racecourse next month and will feature in a bumper catalogue featuring three East Midlands auctions plus properties to be sold by online auction.