You are here: Home Latest News 100th Derby auction is a hit despite being held behind closed doors 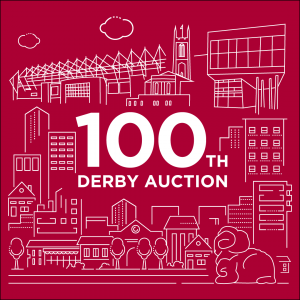 Hundreds of people tuned in to watch SDL Auctions Graham Penny’s 100th Derby auction – the first in its history to be held behind closed doors.

Instead of celebrating the occasion in front of a crowd of people as hoped, just a few staff members were in attendance as managing director and auctioneer Andrew Parker took to the rostrum in the company’s head office.

For the 500 viewers watching on the internet, very little looked different – and the bids came in as thick and fast as ever. With over 120 pre-registered remote bidders, buyers placed their bids on the telephone, by proxy and over the internet, and more than £2.6m was raised for sellers – with more post-auction sales still to be agreed.

Andrew said: “It was not the 100th auction celebration we had planned but we were delighted to have such great support from our remote bidders. I missed seeing everyone at the auction but it was wonderful to know they were out there, watching from the safety of their own homes.” 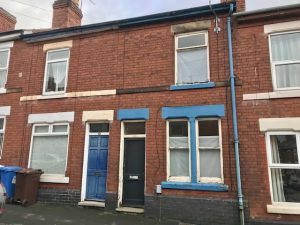 First under the hammer were a trio of terraced properties in Derby city centre, which included 37 Howe Street in Derby, which sold for £86,000 from a *guide price of £50,000+.

Close to the University of Derby and the A38, the mid-terraced property requires improvement and upgrading and has two bedrooms, two reception rooms plus the potential for a loft conversion subject to planning permission.

Andrew added: “This was one of several terraced properties to sell well in the first part of our auction and it has lots going for it, including space, an excellent location and an established garden. Once renovated, whether the new owner chooses to sell or let the property, it is likely to be much in demand.”

Traditional Derbyshire cottages went under the hammer, too, including one in ever-popular Duffield.

Requiring refurbishment, 21 King Street is an attractive stone cottage in the heart of the village. It has two bedrooms, a sitting room with cast iron log burner, a kitchen and a bathroom, plus a rear garden. It sold for £130,000 from a guide price of £95,000+.

Following swiftly on from this lot was another cottage in the neighbouring village of Quarndon.

After the cottage next door sold at SDL Auctions Graham Penny’s February auction, the double-fronted 55 Church Road attracted equally enthusiastic bidding when it went under the hammer, selling for £155,000 from a guide price of £135,000+.

Andrew said: “It’s so rare to get a property in this price bracket in Quarndon, so we’re not surprised it was snapped up so quickly. Quarndon is an exclusive village favoured by professionals and local celebrities, so our buyer has made an excellent investment.”

Heading further up the Derwent Valley Mills World Heritage Site, 20 Long Row in Belper was the third Derbyshire cottage to sell under the hammer, achieving £153,000 from a guide price of £137,000+.

The Grade II Listed period property, which requires upgrading and improvement, features character features including sash windows and exposed beams and is in the heart of Belper’s Conservation Area with views of the iconic East Mill. 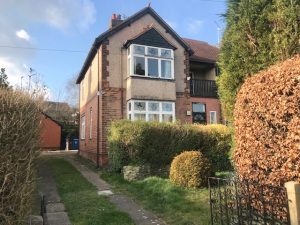 Ending the auction on a high note was the sale of 148 Allestree Lane in Allestree, an attractive four bedroomed semi-detached property with many period features including Minton tiled flooring, moulded coving, original panelled doors and deep skirting boards. The house, which requires full refurbishment, sold for £230,000 from a guide price of £210,000+.

Andrew said: “While we were sad to miss the buzz of being in a crowded auction room, we were so thrilled to be able to offer so many great properties for sale as normal and are humbled to have such great support from our buyers, sellers and partners. We have proved that, despite the current social distancing rules, it is possible to keep the property industry moving – and that buyers are showing just as much interest in our properties as before.”

The team at SDL Auctions Graham Penny are continuing to work remotely and are now on the lookout for properties to sell in the next Derby auction on Wednesday 13th May. To find out more about selling by auction, or to request a free no-obligation virtual auction valuation of your property, click here or call 01332 242 880.